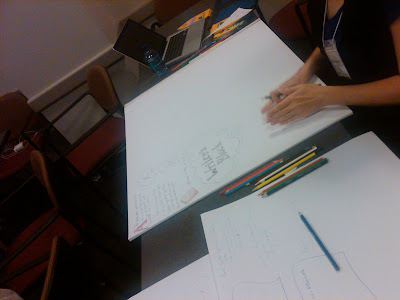 Sid and I were a team for the Game Jam.

Those of you at Innovations in eLearning will know her real name. For the broader audience - I am going to maintain her anonymity so I can still include her in my blog and keep us both out of too much trouble.

Having worked together before made the project much easier than it seemed to be for the other teams.

Other advantages - Sid is a HUGE gamer. I am a more casual gamer. We are both familiar with Facebook and it's games.

During lunch, we found an idea. I let Sid run with it freeform. She was super-excited, so I thought it best to stay out of the way. Occasionally - I'd add some small thing that triggered some other ideas.

Eventually - I sat down and tried to graph out the gameplay. This gave us a logical foundation and showed us any gaps.

This short process allowed us to start creating our 3 panels early. Sid did most of the art. My artistic skills are pretty much limited to stick figures. You will be able to guess which panel is mine ;)

I will be taking pictures of the game boards tomorrow.

Email ThisBlogThis!Share to TwitterShare to FacebookShare to Pinterest
Labels: IEL2010