I left the conference after having some munster cubes and a couple of chicken quesadilla cones. My brain pretty much stopped working after Will Wright's talk. I would have been perfectly happy to hang out with a couple bottles of wine and some of the conference goers as we try to process it all.

This is a gathering of some crazy-smart people. Crazy crazy smart people. Exhausting and exhilarating at the same time. 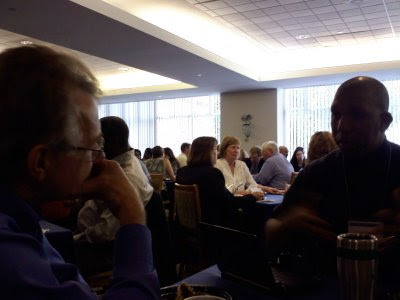 My lunch companions - Clark Quinn (@Quinnovator) and Craig Wiggins (@oxala75). Debating what the personality divider is between the ASTD crowd and the Innovations in eLearning crowd. Among other topics of conversation. Again, another fascinating, free-ranging conversation among people with mutual affinities.

Craig - so happy to finally meet you in person. And I have an idea for a blog post for you. Our conversation during lunch ;')

More of the hyper-smart people I am lucky to have talked to. 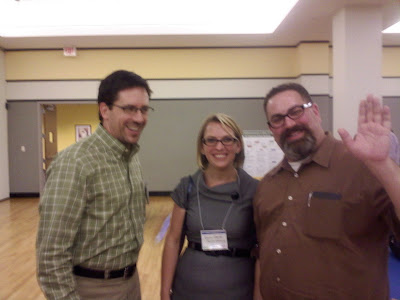 Mark and Aaron both gave killer talks today. Mark practically at the last minute. Aaron had to follow Will Wright. Mad props for being able to present after that talk, Aaron. I was having a hard enough time writing notes.

I'm certain you noticed a trend of fuzzy, bad and unattractive pictures.

I think I am going to use that as my visual trademark.

I took a couple of other pictures during the conference - but they were even cruddier than the ones I've posted today. Will be trying again tomorrow.

Note to self - trying to do that at the last minute, not having attended the session, and relying on TwitFeed to post in a timely manner is not a good idea.

Like everyone else at the conference, I am hoping they post Will Wright's talk from today really soon. You will quickly understand why my notes made no sense.
is a classic example of one of the things Clark, Craig and I talked about during lunch - the ability to process a tremendous amount of information and do something with it.

It was almost scary.

My thoughts on Scoble's talk.

I dunno - maybe I was just tired. I didn't catch a lot of the stuff others talked about on the Twitter feed. One thing he tried to do, which I appreciated, was try to explain how he sifted through the insane amount of material he exposes himself to every day.

A couple of key things I picked up:

- He has 2 levels of filter. Shallow - he keys on who is talking, a topic or a picture. 2nd level - he makes sure he knows who that person is to see what level of credibility he is going to assign them for that topic.

And I think "Who is this person?" is the question we need to ask more overtly when analyzing ANY source. I am not getting a sense that we are paying enough attention to that aspect of information analysis.

I came home to Ryan presenting me with a glass of Pinot Noir cooking dinner.

I guess there are some advantages to having your conferences near home.

I am a lucky woman.

See everyone tomorrow.
Posted by Wendy at 7:26 PM