Will Wright's choice for Game Jam! 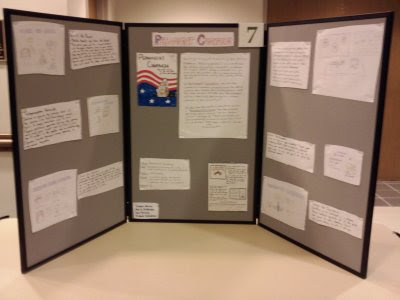 Concept: You are an ambitious candidate. Goal: Presidency of the US. Collection of Mini- Games. Wii based
- Work the Room. Shake hands and meet people
- Teleprompter Kareoke - Deliver the speech. Use Rock Star-type voice recognition
- Choose advisors
- Dodge the Question.
- Office serves as central command and information post. Watch the poll numbers

I had a chance to talk to the team members as they disassembled the project board - Dan slowly peeling off the Excellence sticker and their picture of the box cover to bring back with him and Maria to Des Moines Area Community College.

They won because:
- They did a nice job of dealing with both short-term and long-term effects of decisions. Particularly how a decision that is positive in the short term could prove to be negative in the long term

- "It just looked like fun and I want to play it."

And if we ever see this on the market, we now know where the idea came from and who should get the royalties (please see the list above).....
Posted by Wendy at 5:31 PM

Thanks for the post, Wendy! This was a lot of fun to put together!