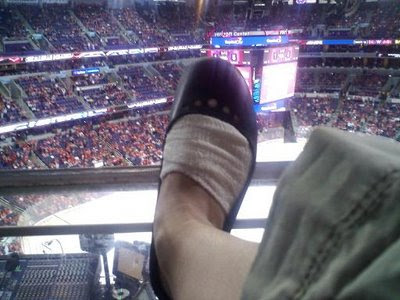 Yup - I think this picture pretty much sums up Game 7 - Caps v. Pens.

It looks worse than it really is.

Thanks to the nurse in the first aid station behind section 414, Verizon Center for patching me up after I found a nice patch of spilled beer to step in.

It's been over a decade since the Capitals have gotten this far. To my thinking, we are just getting started.

Consider - the Hershey Bears, the Caps AHL minor league affiliate, essentially WERE the Washington Capitals through a large chunk of the season.

Our savior goalie (last night was not his fault - please read On Frozen Blog's commentary) was supposed to be in Hershey right now. He wasn't scheduled to be anywhere NEAR the NHL this year. Maybe warming the bench in a pinch. Much less leading the Caps through the playoffs.

The Bears are now preparing to take the next step after beating the Wilkes-Barre/Scranton Penguins (fondly known as the Baby Pens).

I'm seeing if I can get to Hershey this weekend..... 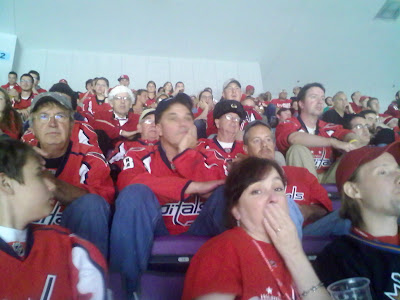 This is section 413 during the 3rd period. I think we were still down 4-0 at this point. Not a lot of joy in Mudville.

These people didn't move until the end of the game.

Well after the end of the game.

I dare say 2/3rd of the fans stayed in their seats - even though all was long lost.

For a city with a (probably deserved) reputation for fair weather fans, that says volumes.

The standing ovation starting at the 2 minute mark and through the handshakes says volumes.

The Penguins fans who stopped me after the game and commented

You guys have some AWESOME fans. I've never seen anything like it.

Check out the footage at the very end of the clip.

Yup. Saw it.
Oh - and Ryan and I are sneaking around in the background in another section of the clip too. Apparently, he made the guy with the buzz cut do the interview. :')

Glad you found the blog!!!

Can't wait to have unobstructed seats next year!

Thanks Mark. Really appreciate that coming from one of my peers.

I'm not giving up on the education space yet. It may just be hockey thoughts for the next week until I get my writing juju back.