A Field Trip to Hershey

What's with all you Caps fans?

I heard a variation of this comment from practically every Hershey Bears fan I ran into last weekend.

I get the impression that there were more of us interlopers from Washington than usual.

Ryan and I went up there to root for the guys who kept the Caps going - particularly mid-season. Upon our explanation as to why we drove 2 1/2 hours specifically to root for "their team":

The Giant Center is a very nice arena. Not a bad seat in the house. 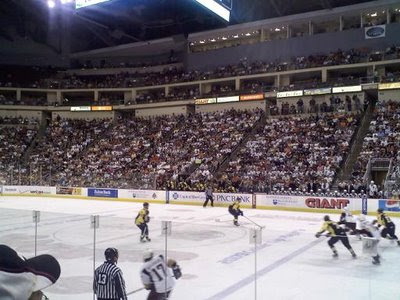 View from Center Ice. The color from my cell phone camera doesn't show the number of Caps jerseys in the house. There were quite a few.... 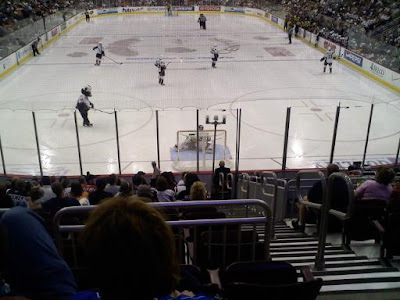 Our "Sega-view" seats - thanks to the nice ushers at Giant Center who let us change seats. Yes - we actually WANTED to sit at the end of the ice.

Hershey fans are very welcoming and willing to share their insights into the players, the team, the history. They are proud that they are the oldest continuous AHL team in existence. They know that they bring depth and a winning tradition to any NHL franchise they happen to be affiliated with - whether it be the Philadelphia Flyers, the Colorado Avalanche, or the Washington Capitals. Right now, especially after this season, Caps fans are glad to have the partnership.

This got me thinking about how there are two layers of fandom.

We went to Hershey to root for the players. The names we were familiar with from the season. Beagle, Neuvirth, Sloan, Helmer, Aucoin. There were a few players that are fan favorites that we didn't know - Arsene, Pinizzotto. The Hershey fans were happy to educate us on them all.

Ultimately, Hershey fans root for the TEAM. Doesn't matter who plays for them - they wear the sweater, they are IN - with all of the cheering, swearing, armchair quarterbacking and bad nicknames that entails. For example, a couple of Hershey fans explained that they call Tyler Sloan "Swiss". In their mind (I didn't see evidence of this on the ice during the game I attended), he plays better with the Capitals. Of course, if he left to play for another AHL team, he would be called "that damned Sloan guy" or some other epithet. It takes love to come up with an imaginative nickname.

Because they are a minor league team - the Hershey fans love it when their guys are called to the majors. The ones I talked to follow Green, Laich and Steckel very closely. They also are huge fans of Bruce Boudreau. And don't even get them STARTED on Varlamov. They are thrilled these gentlemen are doing so well in the bigs and understand that the goal for these players is to graduate to the NHL.

Interestingly, given a choice between major league teams - most would root for either the Flyers or the Penguins (split 50/50 from the informal survey) before the would root for the Caps. They want their boys from Hershey to do well. Couldn't care less if the Capitals do. Because those boys are part of "their team."

I suspect the "team" level of fandom has a lot to do with where you grew up or where you find yourself living. I know my Caps fandom is a result of growing up in the DC area and going to games.

Same with my Baltimore Orioles fandom. I grew up watching the Os because there was no baseball in DC. Living in Baltimore for 7 years only deepened the fandom. Yes, even while they stunk and had bad juju in the clubhouse and made it very very very hard to root for them. Though the Nationals are now in town, and I've gone to a couple of games, I'm still an O's fangirl at heart.

Proximity makes it easier to follow the small stories and tidbits that make an organization come to life.

A web developer being made an NHL goalie for a day.

A veteran defenseman defying all odds and returning from what seemed to be a career-ending concussion.

The little bizarre moments during games that make memories.

Time allows you to watch people come and go. See the team ride the continuum between greatness and gruesomeness (some organizations swing more wildly, of course). And collect many many stories.
Posted by Wendy at 10:17 AM