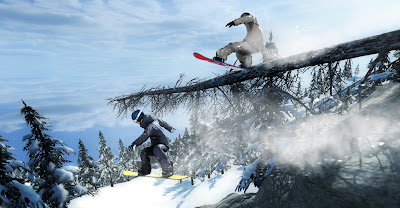 Our Xbox 360 has decided to stop reading discs. We don't even get the satisfaction of the red ring of death.

Thankfully, we had a chance to play this before the Xbox 360 gave up the ghost.

Is the game fun? Why? LOVE this game. The controllers are appropriately responsive and easy to use. Each run is short (between 5 and 20 minutes). You have infinite ways to interact with the mountain. Fantastic variety in the terrain. SO (who happens to be the resident snowboarder / skateboarder) loves that the tricks and reactions are more realistic than most of the other games in this genre on the market.

Also has one of the best soundtracks I've heard in a skateboarding / snowboarding game. Or as the SO put it "This is the stuff we ACTUALLY LISTEN TO when we are going down the mountain."

Must be nice to be able to snowboard confidently enough to listen to music...

Do I want to play this repeatedly? I would play this more repeatedly if the Xbox worked. Try new tricks, explore other areas of the mountain, see if I can't get into the little house at the middle of the hill....

What did I learn playing it? First - a good soundtrack makes a huge difference. The Loading practice half-pipe is a great tutorial in a place where people are normally waiting.

What element(s) can I use when designing a game at work? I need to figure out how to make the "loading" screen more useful. How can I get people to participate during the loading process, not just during the game itself. Soundtrack is a bit trickier because of the audience I work with. Shaun White highlights how good sound can impact the perception of a game.
Posted by Wendy at 8:12 AM

I really like this game on the Wii with the balance board, although the graphics are obviously no-where near as good as on the XBox or PS3