The Value of Specialists 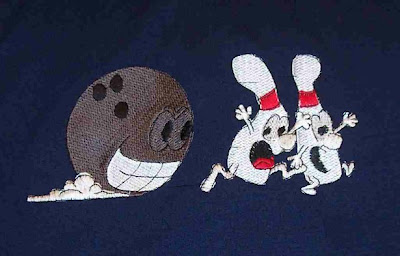 Ahhhh...if I could only strike that level of fear in the hearts of pins......

This weekend, after one full season of bowling, I decided to get a new 13 pound bowling ball. I had been playing with the 14 - 16 pounders in the alley during the short off-season and decided it was time for me to increase my weight. This time, I decided to go to Carmen Don's - a local bowling shop tucked in a building next to one of the local bowling alleys.

Nick, the strapping young man who took care of me, measured my hands more ways than I thought they could be measured for something as prosaic as a bowling ball. He then drilled the ball, had me throw a few times in the store, gave me a couple of tips, fine-tuned the holes and sent me on my way with a shiny new ball and a friendly "Don't be a stranger!"

Can you tell I'm just a tad smitten.

I was even more smitten after I played a couple games with the shiny new ball last night.

I CAN FINALLY KEEP THE BALL IN THE LANE!!!!!

Even the Captain noticed the difference - particularly in my first ball.

I'm still having my usual control and release issues, but once I get used to this thing, I may have a fighting chance of breaking 100 on a regular basis.

I'm reminded that specialists can sometimes help you take that next step in ways that a generalist can't.
Posted by Wendy at 8:41 AM